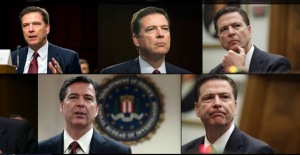 MSNBC has devoted an entire day’s broadcast to ‘puzzling out’ the reason Trump fired Comey. And apparently it’s still an open question. JFC.

Mark your calendar. Yesterday was May 10, 2017. The day democracy fell.

Unfortunately, before we can even discuss the import of yesterday, we have to dispose of the impediment of the media’s current obsession: Why did Trump fire James Comey? And because we’re burning daylight here, I’m going to skip ahead:

Trump fired Comey to stop the FBI’s investigation into Trump/Russia.

In other words, Trump fired Comey for exactly the reason you and I all know he did it: Trump wanted to stop or slow the FBI’s investigation into Russia’s meddling with the 2016 election, Russia’s connections to Trump himself and his campaign/administration. All the other reasons floating about should be disregarded out-of-hand. They are efforts to deflect or distract. They are pretextual.

If you’re interested in riddling it out, as the media seems presently determined to do, in taking at face value each of the varied and shifting justifications the White House has floated and independently evaluating each to see if they hold water, here is a couple of places that can give you a solid head start:

Incidentally, the ‘face value’ approach is the wrong way to go about the analysis of this White House. It is a mistake much of the media continues to make (the above-cited articles are amongst the exceptions, their authors each seemingly unaffected by this widespread media affliction), as it bends over backwards in pursuit of false equivalence. The analysis should NOT be “Trump says this, but appearances say otherwise (not to mention logic). Let’s consider each in turn.” Trump lies far too often for him to be given the benefit of the doubt at the outset, with each utterance given a fresh start/clean slate.

No, the analysis should be: “Trump did something that appears to be X. Let’s examine how each of the presumably pretextual reasons he has offered are not credible.” The approach should be “Of course he’d say that…” Unfortunately, that posture is not in the news media’s DNA, and indeed were this the media’s presumptive posture, it would ill-serve the public and undermine people’s trust under normal circumstances. Our present circumstances are exceptional. This is not a normal administration operating inside the bounds of ordinary democratic governance.

Moving on, there are larger implications arising from Comey’s firing, each significant however obvious or self-evident.

To begin with, realizing that Trump fired Comey to thwart Comey’s FBI investigation of Trump/Russia begs the obvious question. Why? Why did Trump want to disrupt and/or extinguish Comey’s investigation into Russian meddling with our election in 2016? Given the current glacial pace of the news media’s investigation of the threshold question of why Comey was fired, it may be some weeks before they slog their way through this analysis. So I’ll again cut to the chase.

Donald Trump wants to kill the Russia investigation for (again) the obvious reason – because there’s something to it. There is a there there.

Moreover, whatever “it” is, Trump desperately does not want it to come to light. There’s something to Trump/Russia, something that Trump wants to hide bad enough that he’d risk firing the Director of the Federal Bureau of Investigations in order to do so. (Sometimes a thing is exactly how it appears.)

This conclusion, while obvious, is also relatively unescapable. Why does anyone try to prevent an investigation from discovering anything about the subject of the investigation? A: Because there’s something to discover, something the obfuscator does not want to be discovered. One does not try to cover-up a non-existent story because, axiomatically, there’s no story to cover up. In firing Comey, however, Trump has acted to cover up. Ergo, there is something to cover up.

Now here’s the second necessary conclusion, a corollary of the first: Trump’s claims (that the Russian story is ‘fake news’) are bullshit. Trump has for weeks and months tried to claim all along that there’s no story, no scandal, dating back to his curious and sustained resistance to the conclusion (by 17 separate U.S. intelligence agencies) that Russia meddled in our election. It dates back to Trump’s “400 lb. man sitting on his bed somewhere” theory of election hacking. At the outset, his rejection of Russian involvement might plausibly traced his roots to his fears about the legitimacy of his election if it were established the election was “hacked.” Quel horror! Would he have to give back the crown? By now, however, there are too many other ingredients into the pot to reasonably conclude his core insecurities were the sole origin.

Hold on, you say. So Trump lied about there being nothing to Trump/Russia. So what? Trump lies all the time. It’s one of his signature qualities. He lies like breathing.

In response, a couple of things: The first is that Trump, in firing Comey to thwart the Russia investigation, just confirmed there is something to the Trump/Russia story. Personally, I have no need of his confirmation (I’m already there), but his confirmation is important in as much as there remain skeptics even now. This is the Shakespearian “doth protest too much,” and that is something he cannot shake – the more he protests and denies, the more it become evident he’s hiding something. It also, blessedly, has the effect of closing the debate on the subject, allowing us to collectively move on to further questions.

It also means there’s absolutely a reason to keep looking into Trump’s connections, ties and entanglements to Russia, including his campaign’s connections, transition team’s connections and his administration’s connections, both in connection with manipulating the 2016 election (Collusion I), and now, post-election as president (Collusion II). And we should do so aggressively. [Note: Collusion I is also a subset of another critically important independent investigation – Russia’s per se interference with our election. Even if nothing comes of Trump’s ties to Russia (preposterously unlikely), investigation into Russian ‘hacking’/meddling will still be vitally important in order to understand Russia’s tactics in order to prevent it from happening in the future.]

As an aside, it also means that people who have been trying to silence and discredit others with ‘tinfoil hat’ and ‘nut job conspiracy theorist’ slurs can shut up now. Trump/Russia is real, so let’s everybody get over that part, shall we?

Now, once we’re all on relatively the same page, the actual questions become: How real? How deep does it go? Who all is implicated?

We need to get back to asking just how deep a scandal is it, and how broad – how many people are involved. These are the real questions we should be trying to answer. Suddenly. Let’s not forget – we’re talking about our fucking democracy here. We’re talking about Russian ties to and influence over the people occupying the White House right now, people who right now have command of our military, a president* who right now has the nuclear launch codes, and who controls of our intelligence services right now.

We’re talking about whether collusion occurred in 2016 to throw the election to Donald Trump, bringing into question the very legitimacy of this presidency, as well as whether there are continuing ties to Russia right this moment. (Or whether there is as yet unredeemed quid pro quo, e.g., “I throw the election, and you ease sanctions so we can start drilling the Arctic with Exxon and make some real $$$.”)

Incredibly, we’re talking about the real possibility that we’re no longer fully in charge of our own federal government. That’s insane. And also true, real and immediate. We’re also talking about whether treason.

Needless to say, the stakes are high. The highest.

So then, moving past the inane debate of the “why,” Trump’s firing of James Comey now confirms the following:

He knows we all now know he was lying when he said there was no story there. And he doesn’t give a damn. It doesn’t matter that we know, and he undoubtedly relishes the surge of personal power he experiences in this awareness. It’s all about the power at this point. Authoritarian power.

He is that cat, nudging the kibble bowl off the edge of the counter causing it and spill and scatter kibble across the kitchen floor, all while not breaking eye contact with you. He is Marlo from The Wire, staring you down as he pockets a couple of candy suckers he didn’t pay for.

He is, in a word, brazen, and he’s hijacking our democracy in plain sight.

Given the uphill prospects of a Democratic majority in either house of Congress after the 2018 midterms, coupled with the 18-month chasm between now and those elections, proving up a Trump/Russia collusion scandal might be the Republic’s best hope for staving off autocracy. To do that, we need to move past inane, ponderous debates over e.g., why Comey was fired, and concentrate our focus on the details. And by we, I primarily mean the government investigators, the news media, and the public debate stirred up and perpetuated by their respective works. The days grow short, and we don’t have time to be spinning our wheels on non-issues that simple reasoning can lead us past.

Sometimes a thing is exactly what it appears to be. Trump’s termination of FBI Director Comey is just such example.

So let’s move it along. There’s nothing to see here. Besides, democracy in these United States fell yesterday (see Part II), and we’re burning daylight.

One thought on “The Day Democracy Fell – Part I: Firing James Comey”