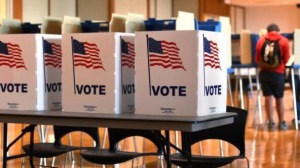 One final comment: You’ll note I did not mention what government I thought we’re living in, if Democracy did indeed fall in May as I’ve posited. If not democracy, Rousseau, then what?

My omission was deliberate; the answer is: I don’t know. It’s neither yet an autocracy nor an authoritarian state in any of it’s myriad forms (fascist, totalitarian, etc.). We drift in a post-democratic ether. So to give it a name, I believe we’re living in a Post-Democracy or perhaps a formerly democratic republic.

As to where we’re headed, we shall see. We might could scramble back to democracy, clamber back aboard (and collapse in an exhausted heap), most notably via impeachment or resignation (however presently unlikely). That’s not the trend, however. If we continue in the current downward spiral unimpeded, we’ll plunge straight into full-blown autocracy in relatively short order, with major strides occurring before the 2018 mid-term elections.

The 2018 mid-terms are critical for the Trump Regime as they represent the last best chance for us to reverse course through one of our legitimately democratic institutions – voting in a free and fair elections. As recently discussed, the Regime is not making any pretense of their intent to surgically remove the “free and fair” part, leaving sham, appearance-only elections in their place.

Free and fair elections are pesky nuisances to burgeoning autocracies. If your policies and governance are not vote-inspiring, you’ll find it much easier to rig the system to secure re-election, than it is to make policy and governance changes that would result in less obscene wealth for the ruling and oligarch classes.

We should look for the Trump/GOP cabal to work very aggressively to ensure victory in 2018 by literally whatever means possible, including inviting/recruiting further hacking and “meddling” from Russia, manipulating voter rolls to disenfranchise legitimately-registered Democratic Party voters, voter intimidation (particularly targeting minorities), and other vote suppression tactics. (Use your imagination. A surge in felony arrests in states denying voting rights to convicted felons?)

It would seem inadvisable to imagine any dirty trick to be too low for the cabal in 2018. As to why not, consider: On November 7, 2016, the GOP was in serious peril, staring down the barrel of twelve to sixteen consecutive years of Democratic presidencies, their party fractionalized and splintered by the interloper Trump’s hijack of the party (does anyone today think Donald Trump is an actual Republican?). The GOP was on the brink of a long period of critical self-reflection about the future of the party itself – what it means, what it stands for. Abandon the far right freak-show and they’d be left with a permanent minority party. Sign on with the deplorable base (after the looming election loss), and buckle up while that ravenous crowd drives the party right of the nearest cliff. Bleak options, both. In short, the GOP dodged a freaking bullet on November 8th.

Juxtapose that near-reality with how very close they are now – with Trump and Russia’s help – to absolute power and minority-rule for decades. They’ve already accomplished a key goal to this end in putting Neil Gorsuch in Merrick Garland’s seat on the Supreme Court. Significant challenges to federal governance inevitably find their way to that court, now significantly more inclined to back the GOP’s play than just a few months ago.

Given the polar binary options presented – absolute power or total destruction – expect the GOP to opt for the former. The biggest immediate hurdle: the 2018 mid-term elections. The Trump Regime will pull out all the stops to secure a majority. Count on it.

It’s worth noting that it took Vladimir Putin over a decade to secure enough control over the Russian government so as to more resemble the old Soviet Union than Boris Yeltsin’s democratic Russia. Presumably there were numerous opportunities for Russia to reverse direction over those 10-12 years. But here at home, the first step towards similar oppressive control is just around the corner, in 2018.

If *45 is not removed before 2018, heaven help us. With Trump still in office, the odds of free and fair elections in 2018 diminish appreciably.