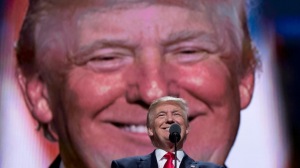 …Same as the old boss.

Trump’s recent discovery of bipartisan cooperation—the idea that the Democrats are more useful than as merely a convenient foil to foment outrage amongst his followers—is good for America overall, but we should not read too very much into it. It fundamentally changes nothing. He is every bit as awful as he ever was. His cabinet is still composed of the worst human beings possible for each particular niche. He’s still as racist as ever, and misogynistic and pea-brained, etc. He is, as ever, a shambling mound of psychoses and otherwise wholly unfit for office in a breathtaking variety of ways. He’s still lying about Russia and is quite very possibly not even legitimately our 45th president. Most troubling of all, he still has his tyrannical dreams of governance, replete with giant-sized depictions of his image plastered onto the sides of buildings across the land, and he is still marching towards implementing that vision, however clumsily.

If we take a breath and realize that none of the fundamental defects have changed, nor have the existential threats to democracy diminished, there’s no reason not to take some small comfort in his being slightly less terrible on certain issues. It’s no betrayal of the #Resistance to see as a net good the passage of a DACA bill with the willing assistance of Chuck and Nancy, or whatever else his newfound appetite for bipartisan achievement cooks up.

We should consider ourselves lucky that he didn’t figure out this mind-numbingly obvious tactic sooner. Imagine how worse off we’d all be if he moved away from grossly unpopular ideas just after his inauguration. All the worst aspects of his presidency would remain—the above-referenced racism et al., his jack-booted authoritarian instincts, his aim to oversee the wholesale destruction of the Obama legacy, not on principled merits, but just because (also did I mention the racism?)—while his poll numbers would have likely stabilized. While I welcome a slightly less terrible president now, that’s no panacea for what truly ails this country, an administration comprised of the worst humans, led by the obscenely corrupt and buffoonish worst of the worst.

Low poll numbers will be instrumental in his eventual ouster, and right now ouster appears to be the only likely way out before he cements his role as El Presidente for life. So let’s savor the sudden possibility of the slightly less terrible, while as yet keeping our eye on the prize—the preservation of liberal democracy in our fledgling republic and the removal of the greatest threat to its continuance since its founding in 1776.

As you’ll perhaps recall, the Who song from which the title of this essay is derived was far less optimistic in lyric than the song title would seemingly indicate. The title words, “Won’t Get Fooled Again” are never sung, not all of them. The lyrics say: “Then I’ll get on my knees and pray; We don’t get fooled again.“

Our Father, who art in heaven…